My sons and I were watching TV when a recent concert by the 80’s rock band Styx came on. The band played songs from two popular albums including “The Grand Illusion.” That night, the hit song “The Grand Illusion” was stuck in my head. The song shatters the myth behind the glamour of being a rock star as it proclaims, “don’t be fooled by the radio, the TV or the magazines,” and ends the verse with the line “and deep inside we’re all the same.”

The money management industry has its own illusions, some which are now being shattered. Many practitioners have held the view that only big firms can outperform the market. This myth has existed despite several white papers that have demonstrated otherwise. Regardless, some of the key professionals at large firms, like rock stars, have taken on a larger than life image with today’s instant media and 24/7 news channels.

This year, one premier bond firm has been in the news constantly, sometimes unfairly. All firms, big and small, have interpersonal challenges among senior management from time to time, particularly during succession planning and performance struggles.

Rather than focusing on “personal issues,” the market should be asking at what point are firms too big to effectively manage money the old-fashioned way. At what point do they “become the market” and lose some of the magic?

According to P & I Magazine the universe of active, domestic fixed income managers contains 273 firms managing $2.65 trillion in assets. The top 20 firms represent a staggering 70.5% of the market share with $1.87 trillion in active, domestic fixed income assets under management. Thus, each top 20 firm (“T20 firm”) on average manages almost $100 billion. Even more incredible, the top 10 firms alone represent 50.5% of the market share with $1.34 trillion. 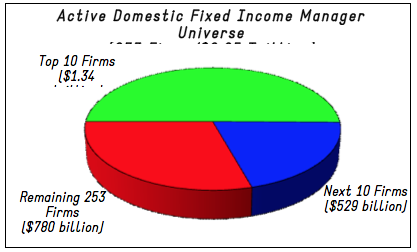 So is $100 billion too big? Let’s examine a corporate bond example. A typical global issue might be $2 billion in size. If a T20 firm wanted exposure to the credit and bought the entire issue, it would only represent a 2% position across its portfolios. Keep in mind that the typical float (tradable supply) is closer to 10% of the deal size. In this example, the float would be only $200 million. Realistically, if the T20 firm wanted exposure to the issue it would be limited to owning the float, a miniscule .20% position across its portfolios. So, the T20 firm is often forced to own multiple small bond positions, diluting many of their best ideas. It is no wonder that many of these firms are forced to utilize derivatives, primarily Credit Default Swaps (CDS), to gain exposure to the credit markets. (The CDS market is unregulated and introduces counter party risk, the risk that the other side of the trade defaults on the transaction.)

Over the past few years, some of the best fixed income opportunities have been in smaller markets. At one point we owned over 40% in agency-guaranteed mortgage balloons for all clients. They performed brilliantly. But, the entire balloon market at that time was barely $18 billion in size, making it impossible for large firms to exploit.

Another incredible opportunity was floating rate notes. The duration of floaters is close to cash because the coupon resets periodically. But after Lehman, many floaters became severely impaired because of wide credit spreads. Some floater prices declined to the mid-50’s. Now, as markets have stabilized, floaters are trading much closer to par. But again, at only $348 billion in size, this market is too small for most large firms.

Adding fuel to the fire, a favorite tool of large firms is being curtailed. Many firms routinely use mortgage Dollar Rolls to add alpha. A Dollar Roll is when a manager sells a mortgage forward and agrees to purchase it back at a later date. As the purchase settlement date approaches, the manager sells it again and buys it back, further into the future. Thus, the manager “rolls” the bonds forward. The transaction allows the manager to have exposure to the mortgage market while having use of their cash. Dollar Rolls are leverage and have recently come under scrutiny by the Treasury Market Practices Group. To minimize the systemic risk to the markets, Dollar Rolls now require margin collateral.

Too big often means too slow. To make a portfolio change, some large firms require a labyrinth of investment committee meetings. In times of crisis, markets move fast and the slightest delay can be costly. For example, the Friday before Lehman failed, Lehman debt was rated “A-” and traded in the mid-70’s. By Monday morning, the price of their debt opened in the mid-30’s. By day’s close, prices had plummeted to the low teens. No time for committee meetings!

As for intangibles, you can’t top boutiques for access. Everybody in the firm is available. And boutiques often have large internal ownership which usually leads to a healthy entrepreneurial environment. Such an environment brings greater intensity to how a firm approaches the markets, client service and their business management practices. As for “bigger is always better,” we think that’s one of the greatest Grand Illusions of all.