As the new year finally takes hold, I realize how glad I am to be back at work! People with big families or who had out of town guests this past holiday season, surely can relate.

During the holidays, we couldn’t get away from the unfolding drama in Washington. Making matters worse was the dreaded deficit countdown. It was everywhere – TV, radio, newspapers, internet, and even elevator video screens. As the deadline approached, many were predicting a market collapse.

All the drama and “fiscal cliff” talk reminded me of a vacation I took a few years ago in Acapulco. On that trip, we watched the infamous cliff divers. The cliffs looked dangerous with jagged rock and just a narrow landing of shallow water. Before jumping, the divers performed a ritual that was part yoga and part prayer. Spectators gasped as the divers entered the water and erupted with cheers as they resurfaced. While the show lasted almost a full hour, the actual jumping took just a few minutes.

My wife and I lingered after the show and saw kids playing on top of the cliffs. With great ease, a few of them jumped off. To me, the “real” theater was not the actual jump but the suspenseful build-up.

In some ways, that’s how this entire “fiscal cliff” saga feels. Elected officials and Washington experts went through their ritual of telling us how scary and dangerous going over the cliff would be. In the end, like the cliff diving, a tax deal was reached in the nick of time and we avoided catastrophe (so far).

At GHA, we stayed fully invested throughout the drama. I’m not sure what gave us more confidence, the memory of the cliff diving or bond market clues. One key clue was the VIX Index, which measures market expectations of near-term volatility based upon S&P 500 index options. The higher the Index, the greater the market fear.

Below is a graph of the VIX Index over the past 20 years. You can clearly see the Index spike up during past crises such as the “Asian Contagion,” accounting scandals, the collapse of Lehman Brothers, and the credit downgrades of Greece and the United States. 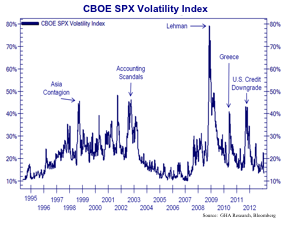 During the recent cliff debate, the Index stayed in the low 20% range. The fact that the Index was so well contained may indicate that the market expected a tax deal to be reached. Furthermore, the market may be looking past the fiscal cliff altogether, and focusing more on fundamentals. In our view, one key fundamental is housing.

Housing led us into the recent recession. Thus, it should be the catalyst out. Below is a graph of two housing measurements since 2000: sentiment and prices. In blue is the Home Builder Sentiment Index. The higher the number, the more optimistic home builders are. The second item, in red, is the Case-Shiller Index, which represents the year-over-year change in home prices for 20 key US cities. The higher the number, the more home prices are increasing.

One can see how bullish builders were in the first half of the decade and how strongly market prices reacted. All of this changed in 2006 as both sentiment and prices began to plunge. The weak housing market led us into the deepest recession since the Great Depression, hitting a bottom in 2009. Since then, we have experienced a strong rebound in prices and a dramatic improvement in sentiment.

Like the spectators in Acapulco, we are watching a drama unfold. Ultimately, the divers hit the water and elected officials will reach an agreement. Thus, we at GHA are staying fully invested and watching both market volatility and housing for clues. With the Federal Reserve maintaining a zero interest rate policy “for the foreseeable future,” we expect volatility to remain subdued and the housing recovery to continue. These serve as the perfect backdrop for risk assets to continue last year’s strong performance well into 2013.