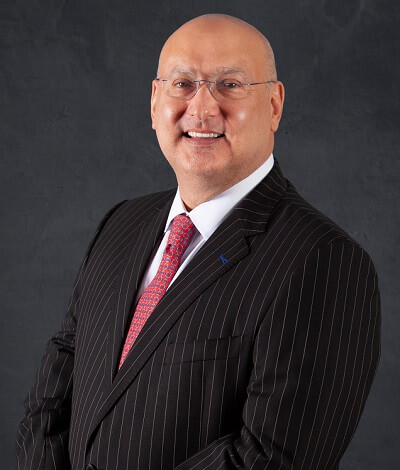 Mr. Garcia received a B.A. in Economics from Yale University. After graduating in 1985, he joined Salomon Brothers in New York City where he became a Vice President specializing in mortgage-backed securities. In 1990, he moved to Houston to join former Mayor Henry Cisneros in building Cisneros Asset Management Company, ultimately becoming its President. In 2002, he joined Garcia Hamilton & Associates, and is the Firm’s Managing Partner. Under his leadership, the Firm has grown from $200 million in fixed income assets under management to over $16.8 billion (as of September 30, 2022).

Mr. Garcia is proud to have served on two SEC FACA Committees: SEC’s Fixed Income Market Structure Advisory Board and SEC’s Asset Management Advisory Committee, where he led the Diversity and Inclusion subcommittee. He currently serves as a member of the Board of Trustees for Dallas Police & Fire Pension System and is the longest serving board member with Chairman Henry Kravis on the Board of Directors of SEO, a non-profit providing summer internships on Wall Street for minority undergraduates. Mr. Garcia was awarded SEO’s Alumni Leadership Award in 2015 alongside other honorees, including the former mayor of New York City, Michael R. Bloomberg, and Co-Founder & Co-CEO of The Carlyle Group, David M. Rubenstein.

Mr. Garcia and GH&A have received numerous industry recognitions. Most recently in 2022, Houston Business Journal recognized the Firm as an Outstanding Diverse Organization within their Diversity in Business Awards. Mr. Garcia was also recognized as a Diversity Champion in 2022 and 2021 for his promotion of diversity and inclusion within the Firm as well as in the Houston community. In 2020, Mr. Garcia received NASP’s Maynard Holbrook Jackson, Jr. Award, which was established to honor the financial services professional who best exemplifies entrepreneurial achievement, community service, and high moral standards. In 2019, he was awarded Houston’s Most Admired CEOs, and the Firm was ranked among Houston’s Best Places to Work in 2018. The Firm also received Pensions & Investments’ Best Places to Work in Money Management five years in a row (2020, 2019, 2018, 2017, 2016), and Emerging Manager Monthly has awarded the Firm Fixed Income Manager of the Year three years in a row (2019, 2018 and 2010). Other past awards include the 2018 US Fixed Income Manager of the Year presented by Fundmap, Institutional Investor’s Intermediate-Term Fixed Income Manager of the Year in 2016 and 2015, and Institutional Investor’s 2014 Fixed Income Investment Grade Manager of the Year. In 2018, Mr. Garcia was co-chair for the Susan G. Komen Race for the Cure. The same year, he was awarded “Male Entrepreneur of the Year 2018” by the Houston Hispanic Chamber of Commerce. Mr. Garcia was recognized by American Jewish Committee Houston (AJC Houston) with the Human Relations Award in 2016.

In 2022, Mr. Garcia was the Co-Grand Marshall of the 44th Annual Martin Luther King Jr. parade in Houston, Texas. From 2012 - 2016, Mr. Garcia served as Chairman of the Metropolitan Transit Authority of Harris County where he implemented the “Garcia Rule,” which requires at least one diverse investment manager be included in every asset class search. Under his leadership, METRO received transparency awards and earned the 2015 APTA Award for Outstanding Public Transportation System Achievement. Mr. Garcia previously served as Secretary of the Board of Directors of the Houston Downtown Management District for 13 years. He was also a member of the Board of Directors of the Yale Club of Houston and a member of the Board of Trustees of the Houston Municipal Employees Pension System. In addition, he is a Class X graduate of Leadership Houston. Mr. Garcia is married with four children and enjoys martial arts and coaching youth sports.